The Gateway of India is probably the most visited tourist place in the city. Since it was so popular I thought it need not be written about but nevertheless its here for its history and grandeur. 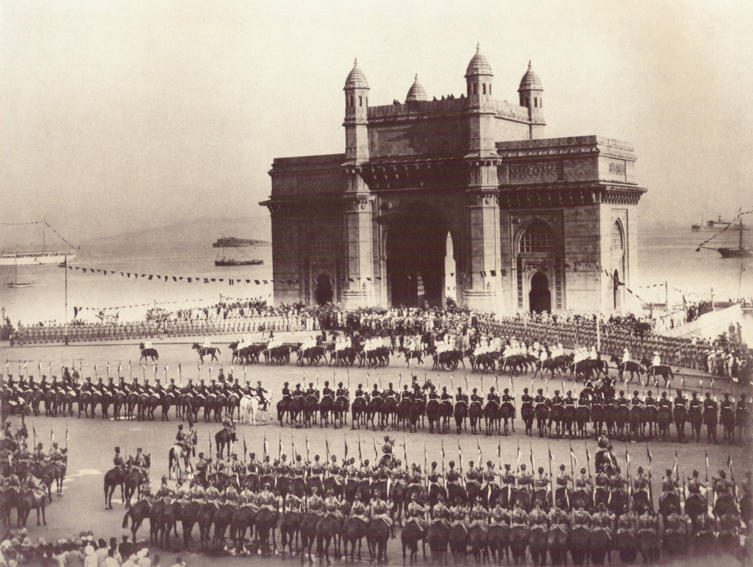 This archaic picture of Gateway of India with full pomp and prestige is on the occasion of dedication ceremony in 1924, when its construction was completed. Photo courtesy: Wikipedia 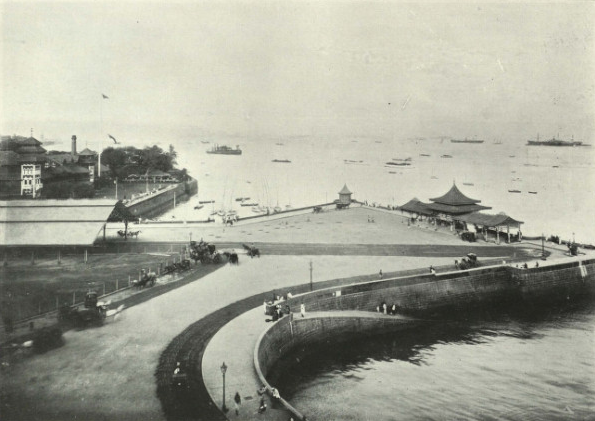 This is Apollo Bundar before the construction of the monument. There is an interesting story on the etymology of Apollo Bundar. Bundar means port (In local language) and at this place the fisher community used to sell Palla fish which got derived into Pollem in Portuguese and later got evolved as Apollo in English. Hence Apollo Bundar which is how this place is still known as, even though the current name is Wellington Pier.

Preliminary works to reclaim the land here were started in early 1900s, and it was during 1915 to 1919 when the new sea wall was built to form the land where the monument was to be erected. Everyone knows that the gateway monument was originally planned to be built to commemorate the visit of King George V and Queen Mary in the year 1911. But they only could see the cardboard model.

George Wittet is the architect of the monument. He arrived in Bombay in 1904 to work with John Begg, who were the two consulting architects of Bombay and largely responsible for the promotion of Indo-Sarcenic style of architecture. He is also the architect of Chattrapati Shivaji Vastu Sanghralaya and many such iconic buildings in Bombay like the Wadia Hospital, Bombay House, The Institute of Sciences, etc.

Today this place has the maximum footfall as a place of entertainment. And also is guarded like a fort. 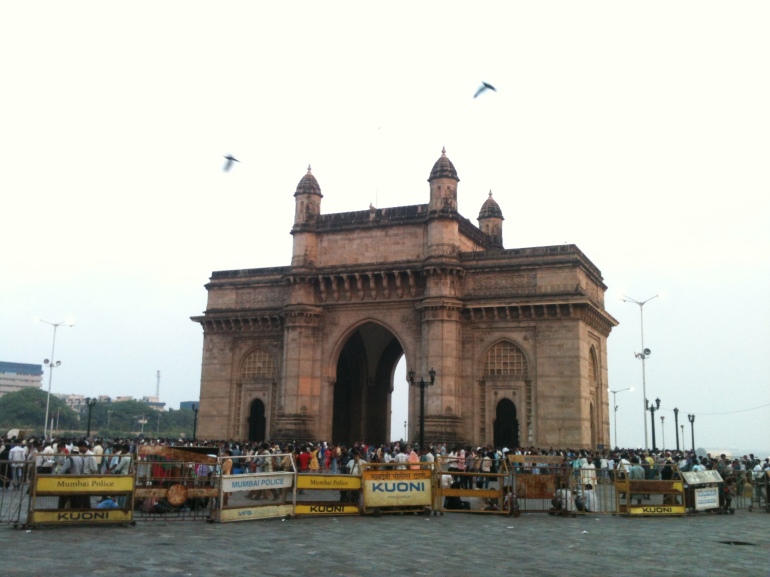 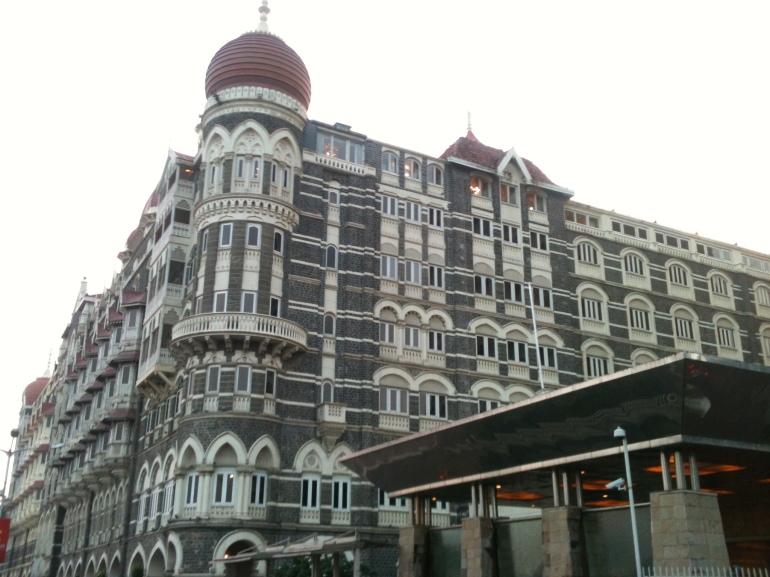 The opulence and grandiose of The Taj Mahal Hotel, which was built before the Gateway in 1903. 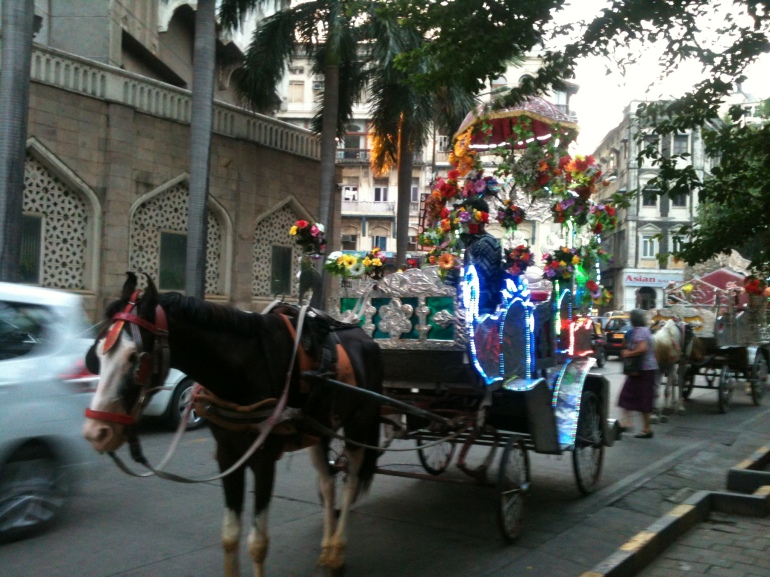 These richly decorated horse carriages are umpteen here and can give you a ride to Colaba and back in some Rs. 300. They are adorned with plastic flowers and LED lights, I wonder if they also have music inside. 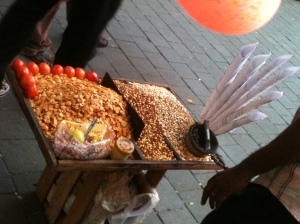 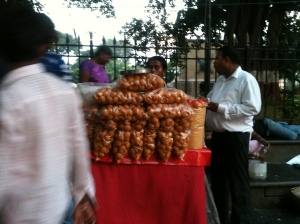 Entertainment cannot be 100% without the talk of food. Food stalls selling Pani Puris, Chana-jor-Garam, Bhel Puris, etc., they seem to be glaring at you everywhere, this can entice even the hi-order healthy eater. 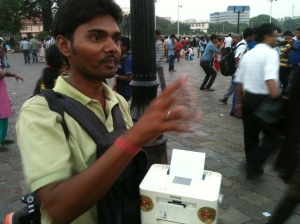 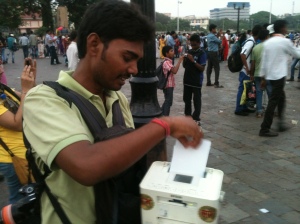 This is the camera guy, you will find such people in hundreds here. According to him there are about 500 of them at the Gateway. This is a tough job he says, they have to give haftas of Rs. 200-300 (illegal weekly installments or extortion, should I say) to the Policemen and the Sweepers around in the area. If they are caught with their equipment beyond the vicinity then a heavy fine of Rs.1200 is laden.

They all carry a back pack and a digital camera, promising to give your photos in “One-minute”. “One copy only Rs.20”. I asked him, “Where do you develop the pictures?”. “Right here, madam” he says with a smile. Inside their backpacks is this portable hp printer and out comes the your picture in just about a minute. Advent of Technology!! I remember about 14 years ago when I had come here as a tourist with my parents, my mother won’t let me a take picture when the camera guy said that he will mail the negatives and the copy to our postal address. She was very apprehensive. 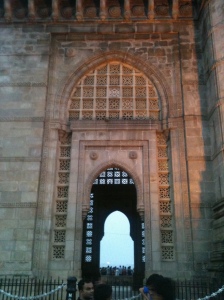 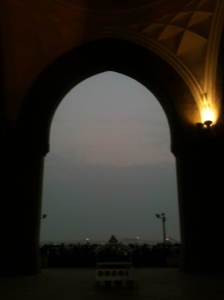 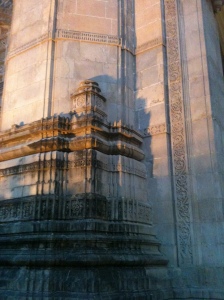 The nitty-gritty details of the monument will reveal Muslim as well as Hindu temple architecture which is supposed to be blended to form a unique beauty. 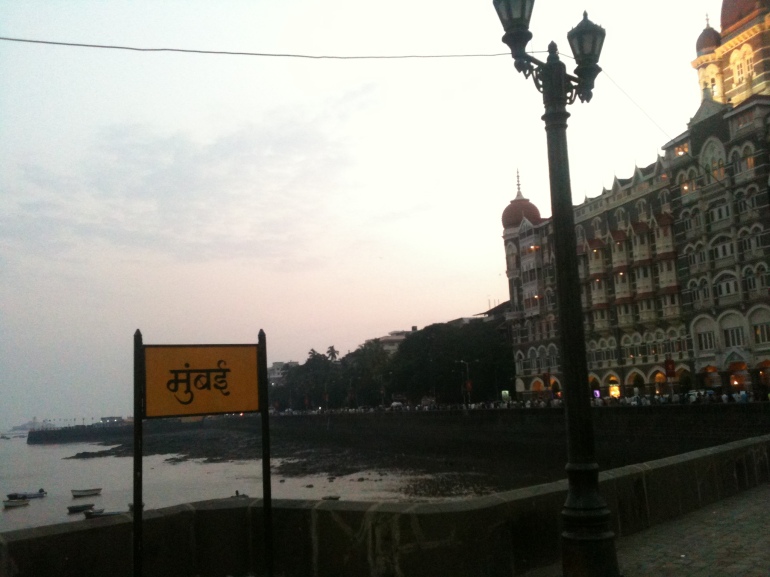 This picture will tell you that the beauty of this city is paramount. But when you are there the muck and stench of sewage makes you irk. The glamour of the monument and the vastness of the sea gets superceded. Hundred thousand people around you striving to find space and you one among them.

Don’t go on a sunday, if you don’t want to get lost!