Walkeshwar derived from marathi word Valuka + Ishwar, Valuka stands for sand and so it means god made out of sand. Folklore suggests Lord Ram visited this place on his expedition to find his wife and he stopped by this place to pray to Lord Shiva. So he made a Shivling made out of sand. Later when he got thirsty he shot an arrow, which is called ban in Sanskrit and there appeared the waters of the holy river Ganga thus the name Banganga which even with the closest proximity to sea hosts fresh water. 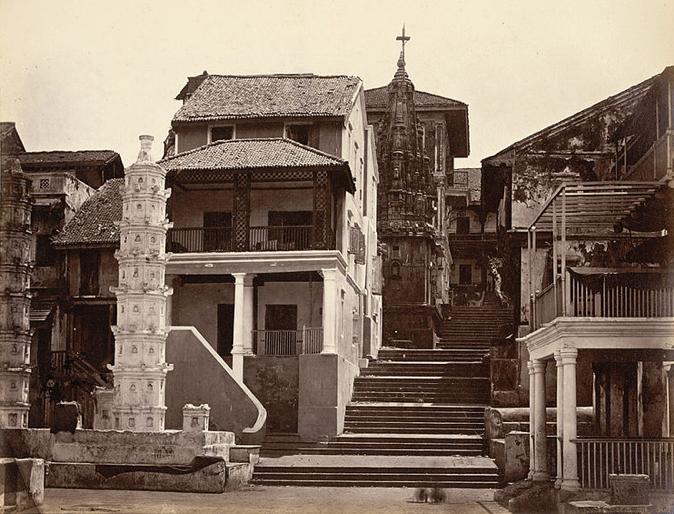 Image courtesy: British Library. This picture of the village of Walkeshwar has been taken in the 1860s.

The Walkeshwar temple and the Banganga tank is known to have been constructed in and around the year 1127. It was commissioned by the then ruler of the Silhara dynasty who are known to have ruled this island and Thane from 9th to 13th century. A minister called Laxman Prabhu who is a Gowd Saraswat Brahmin (subcaste of the Brahmin community), is known to have been the incharge of its construction. Later this temple was destroyed by the Portuguese and then rebuilt again in 1715 during the British Raj by the generous donation of Rama Kamath, again a Gowd Saraswat Brahmin himself.

This place signifies a lot of importance to this sub clan of Maharashtrian Brahmin community. The temple and some of the property around still belongs to this community’s trust. But now when you roam around this area you will only find people speaking Gujarati and various other dialects. This place in Mumbai holds the most expensive real estate and probably the most expensive in the world. But when you walk the narrow lanes of this place you will as if time has frozen. 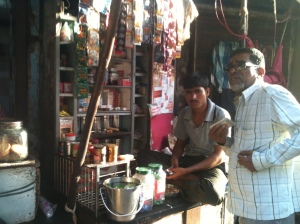 Around 1860 the temple started attaining a lot of fame and many devotees started pouring in. Subsequently many other temples were constructed around the tank. Approximately 20 small temples and 50 dharmsalas now exist in and around that area. 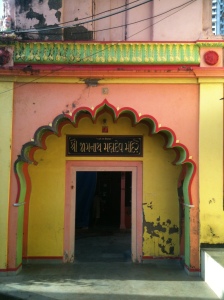 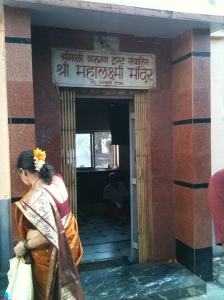 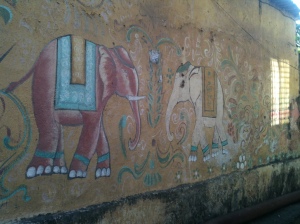 There is still a community that lives around this tank.

People use this fresh water tank for bathing, washing and playing!

This also has served as the venue for Classical Music Festival. Few years ago I had attended Rahul Sharma’s Santoor recital here during one of the mildly chilly December evenings. It seemed supremely serene to me, there were lotuses in the tank, diyas floating in the water and ducks swimming (or dancing) to the tune. Divine! 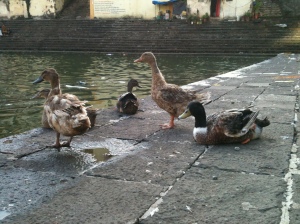 Whither shall I wander…!

Are they ducks or geese? Who knows, but they are heart galore!

A devotee paying offering to Sun 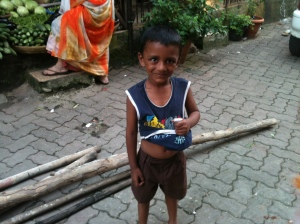 A curious boy interested in getting his picture taken. When I told him I will send him a copy he said, “nai nai, mujhe abhi dekhna he” means no I want to see it right now! 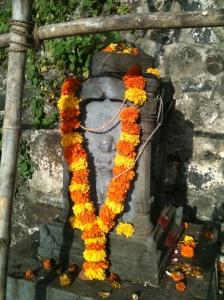 All these offerings for the GOD.

A little treat for you when you walk out of the narrow street, a cutting of masala chai!