Nehru Science Centre was started first with an exhibit called “Light and Sight” in 1977. Then in 1979 a science park was built and a full fledged interactive exhibits were made open to public in 1985. It is the largest science park in the country with 8 acres of open space around with varieties of trees and shrubs.

The centre is very accessible by public transport. It is situated on Dr. E. Moses Road between Mahalaxmi Railway Station on the South and Worli Naka on the North at a distance of about 1 km from either end. The nearest bus stop is Jijamata Nagar.

This is part of the a consortium of National Council of Science Museums which has about 25 science parks around the country. This centre is the largest and has more than 50 hands-on and interactive science exhibits on energy, sound, kinematics, mechanics, transport, etc. My husband recalls seeing these as a kid. That’s the sad part which means that the exhibits have remained unchanged since the time of its inauguration.

If you walked down the centre you will feel you are taking a trip down the memory lane or watching some 1980s movie. The models are made out of paper cardboards and look crass. Some of them have sustained the tamperings of visitors all these years. Basically it looks frozen in time. The decor, choice of colours and the cheap looking plastic models look so pre historic. 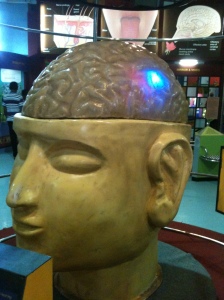 Seriously, is this model invoking any kind of curiosity about brain functioning? 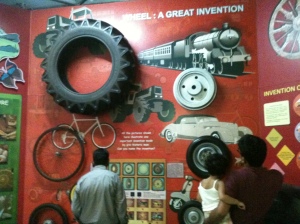 In this age of mobile applications for education and Youtube videos, do we really need to talk about invention of the wheel? 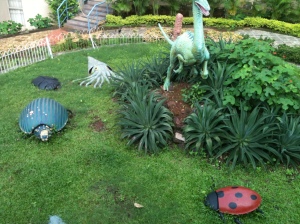 This must be a joke or the artist’s goof up? Look at the sizes of the lady bug and the dinosaur. 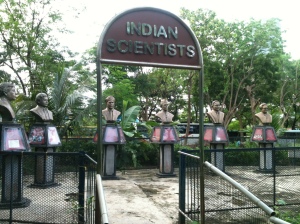 Respects paid to eminent Indian scientists, but I was wondering what these guys must be thinking of the lady bug and the dinosaur?

There are some old exhibits outside in the garden. 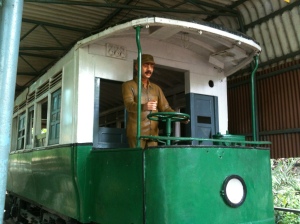 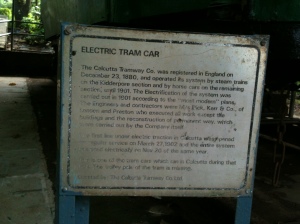 This Tram was manufactured by The Calcutta Tramway Co., registered in England in the 1880. Before electrification, it was pulled by steam mechanism for some section and for the rest of the section was pulled by horses until 1901. In March of 1902 the whole line was then electrified.

This steam engine on display was commissioned in 1914 and was in use in the SIliguri-Darjeeling line of the North-East Frontier Railway. It was manufactured in Glasgow, UK and was in use up to 1967.

There’s noting scientific about them, I guess.

Around 7,50,000 people and 1,20,000 school children participate every year in various activities organised by the centre. On the Centre’s website one of the main objectives is to “portray the growth of science and technology and their applications in industry and human welfare, with a view to develop scientific attitude and temper and to create, inculcate and sustain a general awareness amongst the people.” I was wondering if this was being followed with exhibits withering away and stuck in the past, this centre needs an overhaul.